Comparing and ordering numbers up to ten thousands

Comparing and ordering numbers can be further extended to ten thousands for 3rd grade kids. As explained in ICS-Grade3math under Standard 1: Number and Operations, under Objective 1, "When comparing numbers between 1,000 and 9,999, numbers will differ in only hundreds and thousands places. When comparing, the symbols for greater than and less than will not be used. When ordering, no more than four values are used. Numbers may be ordered least to greatest or greatest to least."

If two numbers have the same number of digits then we need to compare each and every digit stating from left to right side of the number.

Following is the second lesson plan on comparing and ordering numbers: 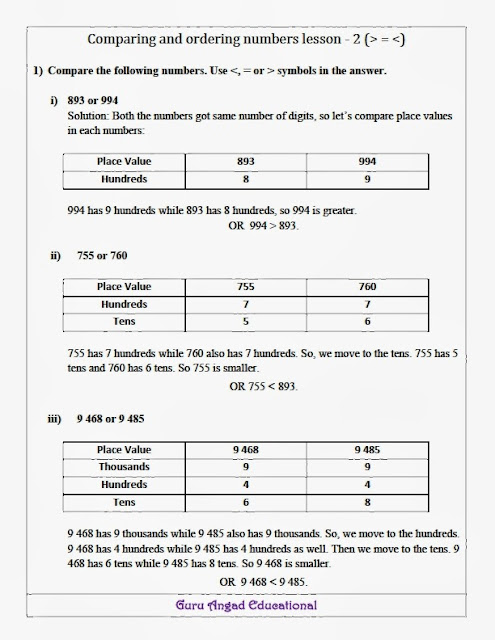 There is the following lesson found on www.nsa.gov site is very helpful to learn and teach comparing and ordering two digit numbers:

More or Less Worksheets: Please feel free to print following very basic worksheets on finding 1 big or 1 less numbers than a given numbers. These worksheets proved to be key skill developers among third grade kids.

Print the following worksheets on ordering and comparing numbers so that kids get more exposure to this concept of number sense.

Finding greater numbers compared to a given number worksheet

Finding the smaller numbers compared to a given number worksheet


That's all about ordering and comparing numbers for 3rd grade math. Students need real appreciation after doing all the above worksheets.